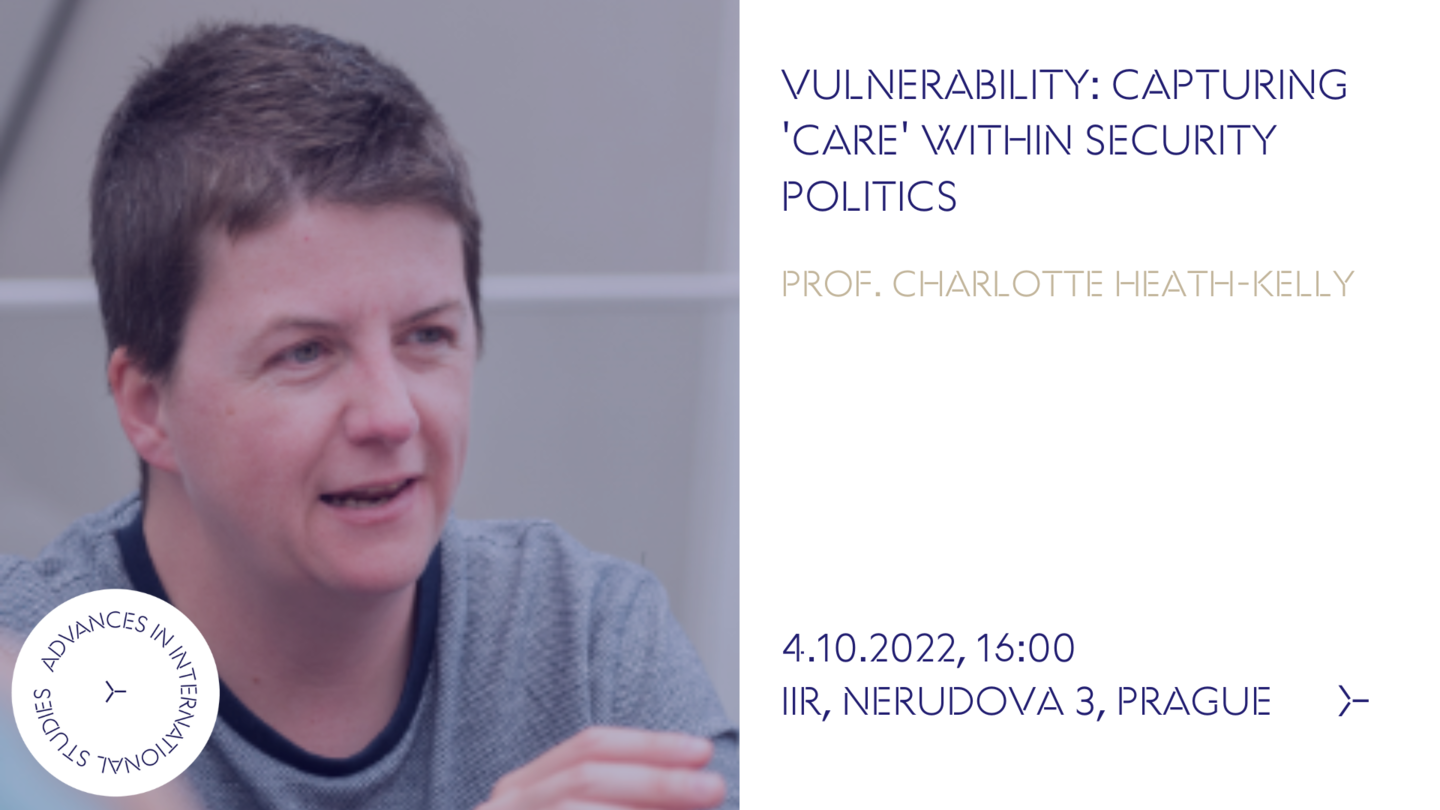 We would like to cordially invite you to the seminar "Vulnerability: Capturing 'Care' within Security Politics" which is part of our series Advances in International Studies. Prof. Charlotte Heath-Kelly will discuss the rise of 'vulnerability support hubs' in UK counterterrorism and the meaning of vulnerability in the governance practices.

In the twenty-first century, ‘vulnerability’ has become central to the governance of security, migration, crime, integration, terrorism, child sexual exploitation and mental health. But what does it mean to govern through vulnerability? Such interventions are often not benign. Rather, 'vulnerability’ is the palatable language through which ‘risk’ is assessed and corrected. 'Vulnerability governance' appropriates the safeguarding apparatuses of health and social care to reach deeper into communities, working to securitize marginalised individuals on account of their potential futures.

After mapping the rise of 'vulnerability' literature in Social Science and in Public Policies, the presentation discusses the rise of 'vulnerability support hubs' in UK counterterrorism. These securitize mental illness, race and socio-economic vulnerability as an urgent public protection issue (not for the disadvantaged individual, but for those who might fall prey to them). Psychiatrists have been placed within counterterrorism policing hubs in Manchester, London and Birmingham. They audit all pre-crime counter-radicalisation referrals which arrive, working with police to create a combined (and arbitrary) risk score - based on psychiatric diagnoses and police surveillance and situational data. If flagged 'red', individuals are detained within an hour in a psychiatric hospital, for public protection. If flagged 'amber', covert information from an individual's counselling sessions is monitored by police. Racialised Muslims are referred to the Hubs at a ratio of 22 to 1, compared to White British.  This intersectional securitisation of race and mental illness is expanding dramatically in UK counterterrorism and is showing signs of travel to Europe. Its fundamental irony resides in the repackaging of vulnerability and care, such that the state is framed as vulnerable and in need of protection - and the disadvantaged individual is exposed to repression, on account of their illness and exclusion. Charlotte Heath-Kelly’s research is supported by the ERC Starting Grant 851022.

Charlotte Heath-Kelly is a Professor of Counterterrorism and Public Policy at the University of Warwick. She is Principal Investigator on the ERC starting grant 'Neoliberal Terror: The Radicalisation of Social Policy in Europe', which looks at the move of national security duties (for example, de-radicalisation programs, and surveillance) into European healthcare sectors. The project explores the transformation of traditional liberal separations between healthcare and policing/security in these new models, as well as the ethical and privacy challenges associated with such multi-agency cooperation. Charlotte's work has recently appeared in Theoretical Criminology, Terrorism and Political Violence, and International Political Sociology. She is the author of Death and Security: Memory and Mortality at the Bombsite (Manchester University Press: 2017) and Politics of Violence: Militancy, International Politics, Killing in the Name (Routledge: 2013).

This seminar will be chaired by Dr. Jan Daniel.