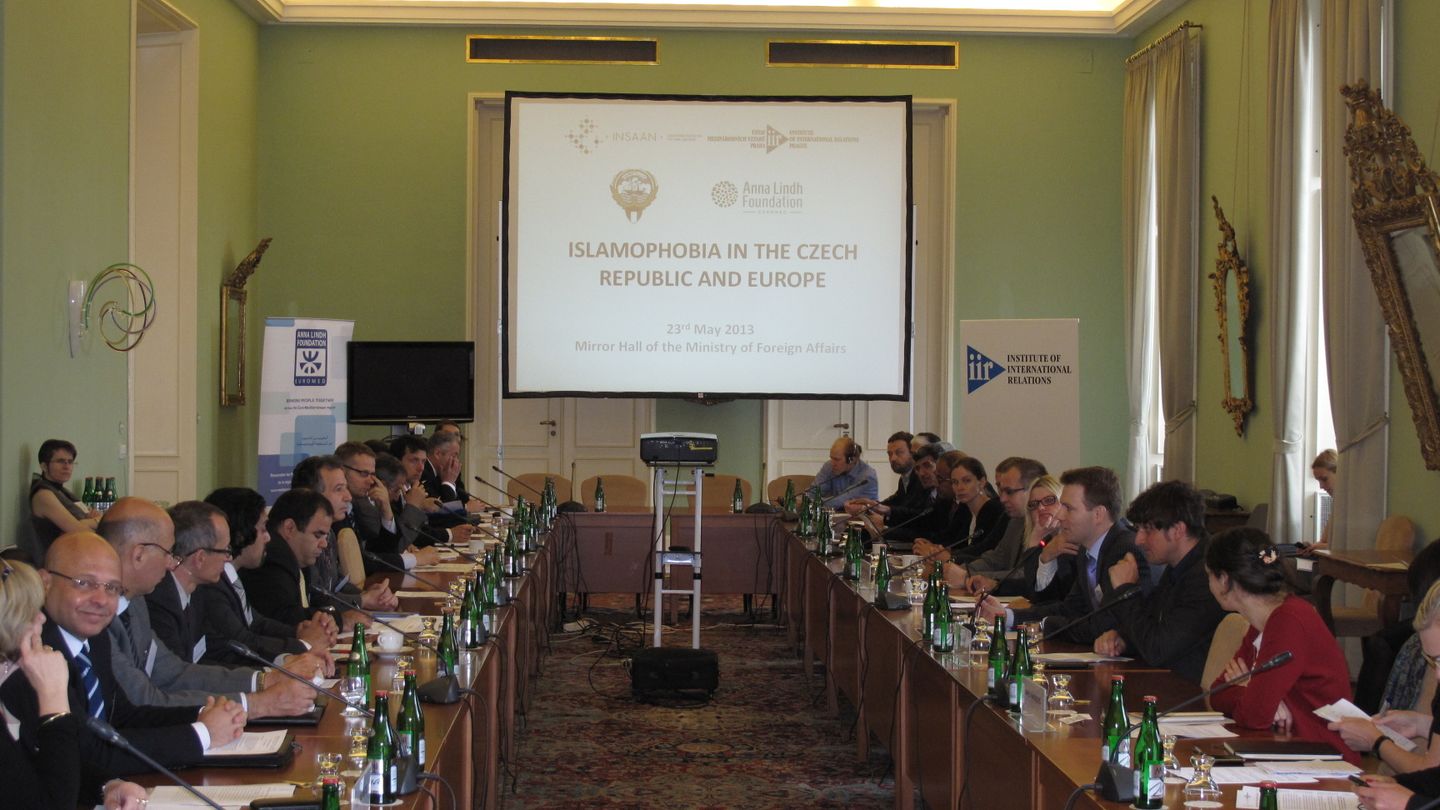 An international conference organized by the Institute of International Relations and Insaan: Czech-Arab Centre for Cultural Dialogue.

The first panel dealt with the definition and usage of the term “Islamophobia”. Mr. Richardson introduced the concept of “open” and “closed” views of Islam and Muslims and a list of eight premises that constitute the latter views (elaborated by the Runnymede Trust in the UK), which can be termed Islamophobic. However, he pointed out that it really does not matter what term do we use for anti-Muslim attitudes but it is more important to focus on their content, manifestations and strategies of coping with these. Mrs. Wetzel made a comparison between Antisemitism and Islamophobia, saying that while there are not completely identical, there is a lot of structural similarities, for example the belief in a danger of a take-over by “alien” group, in conspiracy theories, in hyper-sexuality and in sexual deviance of Muslims/Jews and in their in backwardness and anti-modernity, the collective negative attributions and the detachment between reality and real threats and imagined threats. According to her Muslims are put in the position of the significant “Other” like Jews before and because of global insecurity (climate change, economic crises) national interests and national sentiments and their defense is again in the foreground, feeding anti-Muslims sentiments and the idea of “liberation” of Europe. Mr. Al-Faraj pointed out that Muslims extremists are punished much harshly in Muslim countries than in the West and that if extremists really obey by religious law they would have to leave non-Muslim lands because in Islam the value system (ability to practice Islam) is more important than land. The second panel consisted of three Czech speakers and focused on anti-Muslim attitudes in the Czech Republic. Mr. Ostřanský described the nature of anti-Muslim community that seems to be more active lately, given boost by the perceived take-over of hostile Islamists of some countries in the Middle East in the context of the Arab Spring and by the Israeli-Palestinian conflict as well as outbreaks of extremist or immigrant violence in European countries. He stressed the fact that media are the major cause of anti- Muslim sentiments as the coverage of the Middle East and Islamic topics is quite extensive in relation to the negligible relations/realities the country has in common with these topics. The mainstream media do not feel the same social responsibility with Muslims as with the Jews or Roma population and uncritical anti-Muslim coverage/statements are perceived as normal. Mrs. Kalibová said that although there are cases of verbal or other assaults on Muslims it is extremely difficult to have a good overview of such incidents because many time Muslims do not report them, the police do not classify them as Islamophobic/religiously or racially motivated and even the representatives of the Muslim community do not encourage Muslim victims to seek legal remedy or visibility for the fear of drawing too much attention to the Muslim community. Mr. Mareš provided information regarding the potential for Islamophobic violence among far-right extremists and their confusion in their attitude toward Muslims because some far-right activists might regard Muslims as allies against or as lesser enemies than Jews in the short-term. Czech far-right scene is heavily influenced by the German far-right. Also British (English Defense League), Hungarian and Scandinavian extreme right has influence on the Czech scene. In the third panel, Mr. Choudhury presented an extensive study on Muslims in the Western Europe, concluding that mostly on the local level there are positive examples of coexistence with Muslims having even bigger trust in local institutions and politics than non-Muslims. The most important values are also identical in both groups. Local media are more sensitive and accurate in their coverage of Muslims that national one and health care is the best tool for building mutual trust. Mr. Pedziwiatr gave a detailed overview of the composition of Muslims in Poland and of the reasons of anti-Muslim sentiments additional and specific to the usual ones, e.g. Polish casualties in the War on Terror and in terrorist attacks including the one in Bali. The media in Poland, even the most respected ones, report in a sensational and inaccurate manner about Muslims. The Muslim community as in other countries is not really a community because it is very fragmented. Mrs. Marzouki the situation of US Muslims to Muslims living in Europe. She identified financial and “intellectual” sources for anti-Muslim hatred and said that Islamophobia in the US is not a random phenomenon but to large degree purposefully driven by certain think-tanks, media and personalities. In reality, she said, the issue is not one of a conflict between Muslims and non-Muslims but between two groups of Americans who hold different view of how to interpret the US constitution and what kind of country the US should be – so in a way Muslims became a scapegoat for a larger struggle about the future of the US. During Q/A sessions a lot of issues were actively debated by different participants of the conference: the several layers of Islamophobia (xenophobia; defense of liberal European values; pro-Israeli attitudes; economic issues; feelings of decline and nostalgia for simpler and happier imagined past).

Insaan: Czech-Arab Centre for Cultural Dialogue, Embassy of the State of Kuwait in the Czech Republic, Anna Lindh Foundation