The calls for the international control and eventual elimination of nuclear weapons are as old as the nuclear age itself. High-level initiatives such as the Baruch Plan of the 1940’s, the three-pillar bargain of the Nuclear Non-Proliferation Treaty (NPT) or the presidential proposals at the Reykjavík Summit supported abolitionist visions in the prevalent Cold War strategic discourse marked by the dynamics of superpower arms races and the Dr. Strangelove-like images of a thermonuclear armageddon.

At the height of the Cold War, the issue of nuclear disarmament was perceived as important enough to bring over a million people to the streets of New York, in one of the biggest political demonstrations the United States has ever experienced. After the demise of the bipolar international order, it seemed that the window of opportunity for nuclear abolition opened wider than ever before. However, once the four-decades-long conflict ended, the popular support for disarmament faded out and the world's attention turned to other pressing security problems of the 1990's era.

In the recent years, we can witness the birth of a number of new initiatives that once again aim to spark the global nuclear disarmament movement. The famous Wall Street Journal op-ed’s by the "gang of four" – George Shultz, William Perry, Henry Kissinger and Sam Nunn – suggested that the idea of nuclear disarmament does not belong only to the domain of utopian, idealist hippies, but that it can also be supported in all seriousness by pragmatic Cold War veterans with a realist vision of world affairs. In addition, the so-called "humanitarian turn" in nuclear disarmament discourse has been embraced by a growing number of like-minded states and NGO’s, framing the need for global ban on nuclear weapons through the human security paradigm. Nevertheless, what really brought the disarmament vision back to the forefront of international politics was the fact that the idea of a nuclear weapon-free world was explicitly placed among the top national priorities by the president of the United States, Barack Obama.

It is important to note that his 2009 speech at Hradcany Square in Prague did not only formulate an abstract, long-term goal of nuclear disarmament, but it also laid down a number of very concrete, short-term steps in the area of nuclear arms control and non-proliferation. And this is exactly the logic behind the annual Prague Agenda conference organized by the Czech Ministry of Foreign Affairs, the Institute of International Relations, the Institute of Political Studies of Charles University, and the Metropolitan University. While the feasibility and desirability of “global zero” is an integral part of the conference discussions every year, the topics of particular panels and roundtables also focus in great detail on the recent progress and challenges related to nuclear arms control, non-proliferation and strategic stability. The aim is not only to gather renowned experts, scholars and decision-makers to track the progress within the broadly defined president Obama’s disarmament agenda, but also to discuss, propose and challenge new ideas that may complement it.

A prominent theme at 2014 Prague Agenda conference was the issue of engagement of nuclear-armed states beyond the United States and Russia in arms control initiatives that have been so far employed exclusively in a bilateral setting between the two major nuclear powers. That means, in particular, a creation of a new multilateral format in which the respective states would agree to accept some more or less formal limitations and reductions of weapons in their arsenals, as well as measures to enhance transparency and trust among participants. Most notably, US Under Secretary for Arms Control and International Security Rose Gottemoeller used her speech in Prague as an opportunity to announce a brand new multilateral initiative called the International Partnership for Nuclear Disarmament Verification, with the aim to develop solutions to the issues connected with the future multilateral verification regime involving all nuclear-armed states.

Furthermore, last year‘s conference also discussed prospects for the success of the upcoming NPT Review Conference; nuclear proliferation hard cases North Korea and Iran; the impact of Ukraine crisis on nuclear affairs; and the hypothetical implications of nuclear disarmament in both global and regional contexts.

One of the speakers at the conference noted how important is the role of education and particularly the universities for the success of nuclear disarmament vision. In this context, I was very happy to hear that a number of students from Czech universities met with some of the most renowned international experts on nuclear issues that attended the Prague Agenda and interviewed them.

The result of their work is this special issue of International Politics. The list of notable names include Ulrich Kühn from the Hamburg University's Institute for Peace Research and Security Policy who currently coordinates the project on challenges to deep nuclear cuts; Jenny Nielsen, a postdoctoral research fellow at the School of Political Science and International Studies at the University of Queensland, who is researching the 'humanitarian initiative' leading up to the 2015 NPT Review Conference; Steve Pifer, the director of Brookings´ Arms Control and Non-Proliferation Initiative and a former United States Ambassador in Kiev, who shared some of his thoughts on arms control in the context of the current crisis over Ukraine; Tariq Rauf, new director of Arms Control and Non-proliferation Programme at SIPRI, who commented on the failure of Western diplomacy in the case of North Korean defiance of nonproliferation norms and on importance of E3+3 dialogue in the context of Iranian nuclear program; Nick Ritchie, lecturer and researcher at the University of York dealing with the UK perspective of nuclear disarmament; Christian Weidlich from Peace Research Institute Frankfurt, who discussed the issues through regional lenses of Middle East security complex; and last but not least Carmen Wunderlich from the same institution, who commented on the role of OSCE and other international organization.

In the concluding paragraph of this short essay, I would like to briefly reflect on the oft-made comments that it is fruitless to talk about arms control and disarmament when the relations between the West and Russia are at their all-time low since the fall of the Berlin Wall. One should not forget that during some of the most critical moments of the Cold War, arms control talks between Washington and Moscow enabled an unprecedented strategic dialogue between the two competitors, building mutual trust and deepening their understanding of each others’ intentions. Despite all the complex issues we deal with, arms control negotiations should not be seen only as a challenge, but also as an important political opportunity. In today’s complicated international situation marked by the Ukraine crisis, high-level discussions over the next steps on the long, rocky road towards global nuclear disarmament may well serve the very same purpose.

Michal Smetana is PhD. candidate, lecturer and research associate at the Institute of Political Studies of Charles University in Prague. He graduated from Charles University with Bachelor's Degree in International Area Studies and Master's Degree in Security Studies. In 2013, he was appointed to the position of the Deputy Head of the Centre for Doctoral Studies.

Ukraine crisis is not going to affect the non-proliferation regimes

Carmen Wunderlich: The biggest problem is the mutual lack of understanding

Ulrich Kühn: Future of the CTBT hinges on ratification in the United States 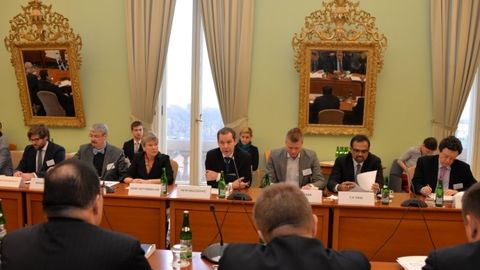