What Made the OPCW Successful?

Ministerstvo zahraničních věcí České republiky ve spolupráci s Centrem evropské bezpečnosti Ústavu mezinárodních vztahů uspořádalo přednášku generálního ředitele Organizace pro zákaz chemických zbraní (OPCW) Ahmeta Üzümcü na téma: "What made the OPCW successful?".The Ministry of Foreign Affairs of the Czech Republic in cooperation with the Centre for European Security of the Institute of International Relations organized a lecture with a subsequent discussion with H.E. Ahmet Üzümcü, Director-General of the Organisation for the Prohibition of Chemical Weapons on "What made the OPCW successful?".

H.E. Mr Ahmet Üzümcü was appointed Director-General of the OPCW in December 2009 by the 14th Session of the Conference of the States Parties to the Chemical Weapons Convention and began his first term of office on 25 July 2010. He was reappointed for a second term at the 18th Session of the Conference of State Parties in December 2013. He received the 2013 Nobel Peace Prize on behalf of the OPCW in December 2013. In January 2014, he was awarded the Medaglia d’Onore and the Sigillum Magnum by the University of Bologna in Italy.

Ambassador Üzümcü is a career diplomat with vast experience in multilateral diplomacy. During the past decade he has represented Turkey at the North Atlantic Treaty Organization (NATO) Council, the Conference on Disarmament, the United Nations and other international organisations in Geneva. Ambassador Üzümcü chaired the Conference on Disarmament for four weeks in March 2008 and attended various disarmament-related meetings and conferences in Geneva, Brussels and elsewhere. He has a thorough understanding of and considerable expertise in political-military affairs, disarmament and proliferation issues.

In addition to his diplomatic experience, Ambassador Üzümcü served in an international capacity as a staff member of NATO’s Political Directorate from 1989 to 1994, where he contributed to work on NATO’s Partnership for Peace initiative in the immediate aftermath of the Cold War and travelled extensively in Eastern European countries and the former USSR. 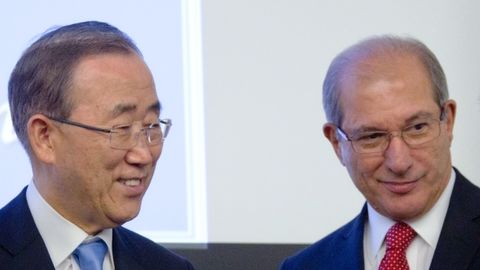