The Eastern Partnership: Two Years after Vilnius and a Year after Riga – Quo Vadis?

The Institute of International Relations Prague organized in cooperation with the Embassy of the Republic of Lithuania in the Czech Republic the seminar "The Eastern Partnership: Two Years after Vilnius and a Year after Riga – Quo Vadis?".

Laurynas Kasčiūnas became the Acting Director of the Eastern European Studies Center in April 2015. Prior to that, Kasčiūnas was the Head of the EESC's Policy Analysis and Reasearch Division. From 2009 to 2012, Kasčiūnas served as Foreign Policy Advisor to the Speaker of the Lithuanian Parliament. Prior to that, he served as the Director of the Centre for Eastern Geopolitical Studies (2008-2009). Kasčiūnas also lectures at the Institute of International Relations and Political Science at Vilnius University (IIRPS VU).

Ambassador Žygimantas Pavilionis has served as Ambassador-at-Large for Europe’s East (European Neighborhood) at the Lithuanian MFA since August 2015. He is also a Lithuanian career diplomat. As for his earlier posts, Pavilionis lead the European Union Department from 2002-2004 and served as a Political Director and Deputy Foreign Minister from 2005-2009. More recently, he served as Chief Coordinator for Lithuania’s presidency of the Community of Democracies (2009-2010) and as the Lithuanian Ambassador to the US and Mexico (2010-2015).

The author of the photos is Mantas O. Ciuksys. 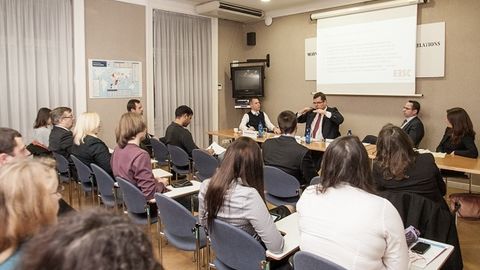 Embassy of the Republic of Lithuania in the Czech Republic