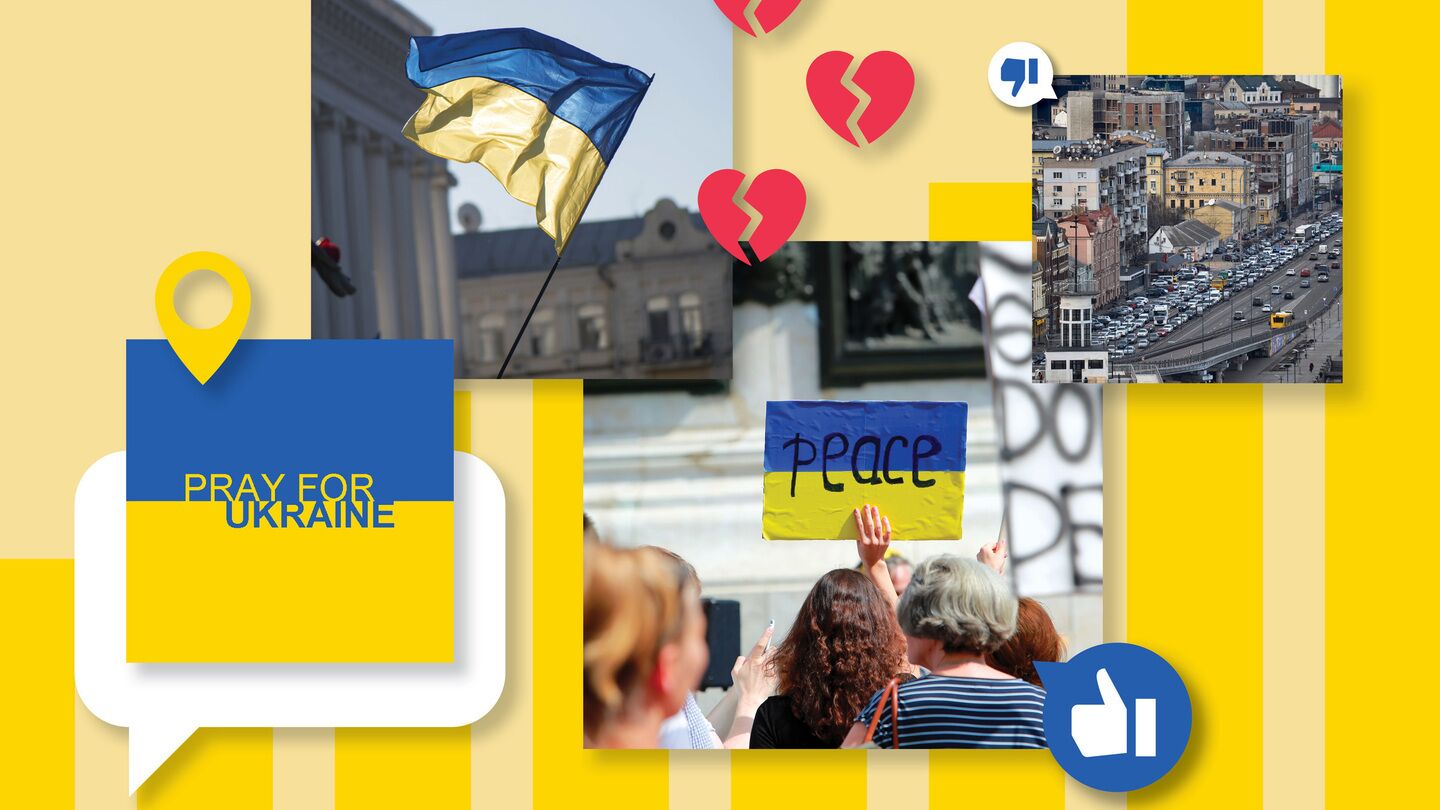 The “hearts and minds” dimension of the ongoing Russo-Ukrainian War does not gain nearly enough attention from the public. It is especially relevant for the Ukrainian side, which does not idle as the Kremlin spreads its narratives undermining the legitimacy of the Ukrainian state and nation. To the surprise of many, Kyiv constructs complex counter-narratives that not only repel the Russian deceit but cripple the very pillars of the enemy’s state ideology. Naturally, without telling one’s own story, a nation would expose itself to influences from outside and leave its image to be made up by others.

The “story” here is a set of strategic narratives, i.e., verbal constructs political actors utilize to articulate their stances, interests, and values. This text aims to shed light on the narratives crafted by the Ukrainian authorities to fight the ideological war with Russia, which viewpoint is briefly reviewed too.

Russia’s view of the Ukrainian sovereignty

The recent evolution of the Kremlin’s delegitimizing messaging targeting Ukraine helps to understand the Ukrainian response. The last few years saw one crucial shift in Russia’s strategic narrative and public messaging, which is the transfer from hidden to overt denial of Ukraine’s state legitimacy. The Kremlin’s rhetoric attempted to mimic the most basic concepts of liberal international order up to June 2021, when Putin’s article on “the historical unity” of Ukrainians and Russians openly questioned the territorial integrity of Ukraine and the legitimacy of its government and underlined the hazard Ukraine allegedly emanates to Russia. The following quote from another Putin speech summarizes his message:

“All the subterfuges associated with the anti-Russia project are clear to us. And we will never allow our historical territories and people close to us living there to be used against Russia.”

Ukraine’s response to these claims is not only a simple denial but a comprehensive alternative vision of the subject, which is the nation’s right to have a separate state. Importantly, it also contains claims challenging the legitimacy of Russia itself.

The historical counter-vision told by Ukraine lays a foundation for all other narratives. In his messages regarding Ukraine, Putin repeatedly mentioned the history of Ukrainian statehood, or rather its alleged absence. Kyiv’s counterargument here is an assertion of a historical continuum between the modern Ukrainian state and its predecessors, which include, most importantly, Kyivan Rus and other polities from more modern history. An anniversary of the Christianization of Kyivan Rus was celebrated on July 28, 2021, in Kyiv. In his speech delivered on that day, Zelensky for the first time referred to this Medieval state as “Kyivan Rus-Ukraine”, a wording never heard from a Ukrainian official before. An excerpt from the speech shows how the narrative is conveyed:

“... Between Kyivan Rus and Ukraine - a thousand years and one sign. In the text of the corresponding decree [to celebrate the holiday] of the President of Ukraine, there is a dash between them. And it's not just a punctuation mark. This is a sign that Ukraine is the heir to one of the most powerful states of medieval Europe. [...]

Zelensky then further explicitly argues that the Kyivan Rus, together with other historical eras, was "the basis when Ukraine declared its independence in 1991." Thereby he creates a long historical arc to legitimize Ukrainian statehood - as well as to subvert a rival Russian claim. The concept comprehensively explains the logic of the ongoing war. According to it, the reason for animosity between the two states is rivalry over the legacy of Kyivan Rus, which stems from Moscow wrongfully claiming this “birthright” while within this narrative it is Kyiv who is the sole legitimate heir, thus rightful to be the grand power of Eastern Europe and dismantle the “false” empire. This notion shatters Moscow's claim to “gather Russian lands” which is used to justify the imperial conquests.

Delegitimization of the opponent

Speaking of more tangible notions, Ukrainian authorities realize the need to actively delegitimize and dehumanize the Russian state for both domestic and external public and therefore pursue the “terror state” narrative, which is based on actual Russia’s deeds. They have been successfully exploiting the gory face of the Russian way of war to its own informational benefit. By highlighting collateral civilian damage from the hostilities, indiscriminatory violence, and outright war crimes done by the opponent’s side, Kyiv managed to significantly harm the Kremlin’s image for both the domestic audience and some Western allies. For the first time, Zelensky used this wording in regard to Russia on March 17th this year. When mentioning numerous civilian casualties, the Ukrainian President called on the world community to designate Russia as a terrorist state. By conceiving others even thinking of Russia in this way, Ukraine may be able to question the legality of any action undertaken by the Russian government and its very legitimacy. Although this demand might seem unrealistic in a legal sense it looks promising rhetoric-wise, being voiced in parliaments of several EU countries and the US Congress. The successive actions of the Russian army and government, often of a clearly criminal nature, then play into the framing provided by this narrative and further reinforce it.

The audience of the Ukrainian narratives is not limited to Ukraine or the West. In order to articulate its goals and political messages Ukraine goes as far as to address the Russian population directly. It is worth overviewing two yet biggest narratives in this regard. The first of them may be conventionally called the “prison of nations”. The idea of the Russian state being a large repressive apparatus for all or most ethnicities and nations “locked” under the label of Russians is not new. This narrative goes back all the way to the 19th century, but the subject remains the same. A good illustration of this story is a piece by a Ukrainian state agency that tells how the Kremlin weaponizes the ethnical diversity of Russia. The article implies that Russia has been strangling real federalism and oppressing minorities for a long time, but war may yield new opportunities for different nations to break free from the “prison” that uses them as cannon fodder. As a state official, the author claims previously unthinkable:

“Ukraine no longer has any legal or moral obligations to Russia regarding its sovereignty or territorial integrity. [...] Therefore, the initiatives of Ukrainian parliamentarians, such as the draft Resolution on recognition of the state sovereignty of the Chechen Republic of Ichkeria [another name of Chechnya], should not be surprising.”

This way Ukraine plays the same card of regional disputes and interethnic ruptures Putin tried to utilize in his messages. The second narrative directed at Russians themselves revolves around the concept of “free” democratic Russia. The point of this narrative is that those Russian citizens who have an opportunity and desire to fight alongside Ukraine should do so as it will eventually benefit the new Russian state that might appear after Ukraine’s victory. The concept of “free Russia” addresses all Russian citizens the Ukrainian government sees as capable of productive opposition to the Kremlin. This narrative has a real physical groundwork in the form of the so-called “Legion ‘Freedom of Russia’” and other units comprised of Russian volunteers and ex-soldiers of the Russian Army who decided to switch sides. Members of these units declare an aim to remake Russia as a democratic country. Detention of potential recruits is itself evidence of the threat this narrative poses to the Kremlin.

It is difficult underestimate the role of state narratives in the existing world of hyper information and interaction. And yet, it looks like that was one of the numerous mistakes Russia had made prior to the full-scale war. The Kremlin continues to fail to notice how it is being bested in the battle for the minds of people. The Ukrainian authorities have invented unique and powerful narratives that push the necessary agenda both domestically, in the West, and even inside the heads of Russians. The ability to produce and spread stories that are able to lure the nation and the entire world is among several things that gave Ukraine a chance in what seemed a hopeless war. And, perhaps, this is the thing that will grant it an eventual triumph.

Artem Samborskyi was the Future for Ukraine research fellow at the Institute of International Relations Prague in May-August 2022. This article was completed as part of his fellowship.