The final 2018 issue of Mezinárodní vztahy / Czech Journal of International Relations (4/2018) is also the very first one containing exclusively English articles. Our journal aims to strengthen the Czech voice in the global academic arena and provide excellent international researchers access to our readership in the Czech Republic and other countries.

In the first article, Hejkrlík, Horký-Hlucháň and Němečková use the concepts of brain drain, brain gain, and brain waste in an analysis of Czech Tertiary Scholarship Schemes as Institutionalised Migration of Highly Skilled Labour. The authors argue about the mixed evidence of effectiveness and the path-dependencies of this long-term Czech development activity. Moreover, the article presents unique data and analysis of the major factors that influence students' migration decisions on whether to stay in the Czech Republic or go back to their country of origin.

In the second research article of our first English issue, Pavel Hlaváček uses the perspective of engagement to compare the United States' relationship with Russia and China. He argues that one should not throw these two countries in the same basket. While China has been working on its power and prestige in close cooperation with the United States, then Russia has tried to re-establish its power potential and international prestige in opposition to its greatest rival. Therefore, China is, in fact, a kind of 'status-quo power' and we should reserve the label 'revisionist power' for Russia alone.

In the third article in this issue, Lucie Kadlecová engages the reader in an interesting exploration of the intricacies of state responsibility attribution for acts of cyber-attacks. Based on the evidence available on the Russian-Georgian conflict of 2008, this study proposes a basic categorisation of four kinds of indirect evidence that can be used to attribute state responsibility for cyber-attacks in international relations: level of coordination, level of preparedness, state relations with the national hacker community, and state conception of cyber-security.

The English issue also offers book reviews that touch upon the topics of energy security, gender and language, and migration. A peer-reviewed academic journal that publishes original research articles in the field of international relations. Our quarterly also invites contributions from other fields of social sciences that deal with international issues. Founded in 1966, our journal became the flagship of Czech IR.

Visit the website of the journal for more information! 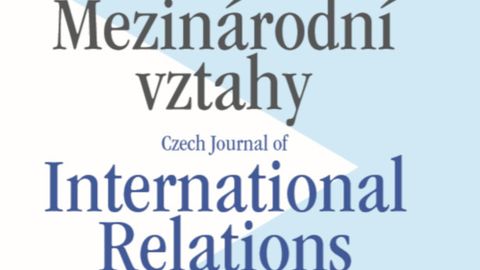