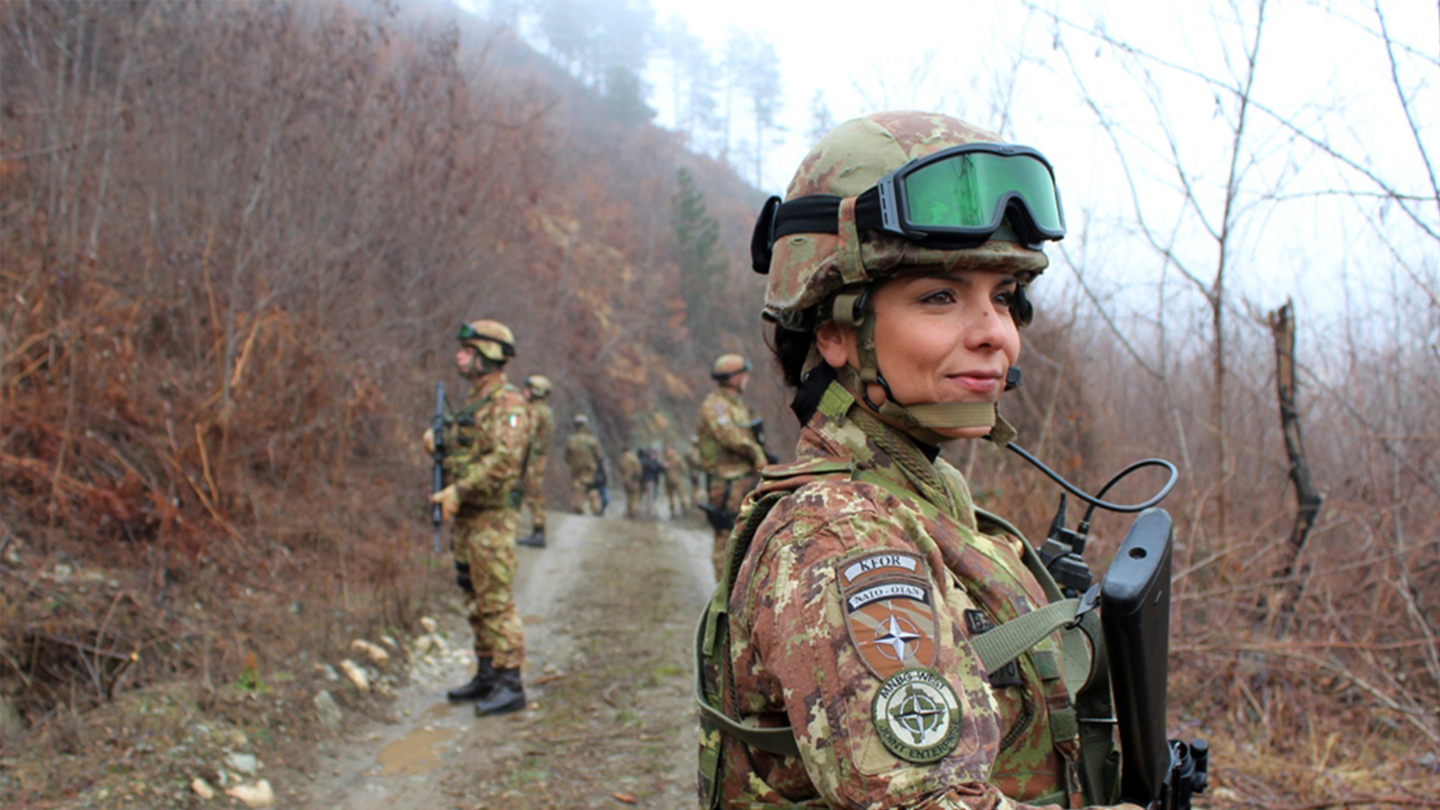 Gender and NATO: How NATO deals with gender equality issues and the prospective changes after NATO summit Over the past decade, gender has become an institutional part of NATO through the United Nations Security Council resolution 1325 on Women, Peace and Security (UNSCR 1325). The adoption of this resolution has led to many important reforms within NATO in terms of the structure of the offices and military operations, as well as external reforms such as the shift towards a more open attitude regarding the adoption of gender perspectives into everyday practices. However, discussions such as the one held at the IIR with H.E. Kerry Buck, LTC Magdalena Dvořáková, and Researcher Míla O’Sullivan are still crucial in facilitating a more in-depth understanding of these practices. These experts each have a different professional background, but together they provided a fruitful conversation about the position of gender within NATO, and the work that still needs to be done.

Work of the First Female Ambassador to NATO

H.E. Kerry Buck began the discussion by relaying the experiences throughout her career to where she is today. As the first female Ambassador to NATO from Canada, it is evident how seriously she takes her work, and the importance she places on effective and sustainable resolutions to conflicts. Through her prestigious career in Canada’s Foreign Service, H.E. Kerry Buck has seen the evolution from the focus upon women as victims because of their gender, specifically in the cases of the former Yugoslavia and during the Rwandan genocide, to the shift towards a more inclusive emphasis on gender. She highlighted an important effect of this shift from women’s equality to gender, in that it broadened the conversation to include equality of treatment. For example, H.E. Kerry Buck cited the issue of attracting and retaining women in the armed forces, and how this issue stems from the need to do more to keep families together and to ensure a better balance of work and life. By addressing the root problems through a gender approach, a more sustainable solution can be found, whereas women’s equality only looks at inputs.

Czech Servicewoman in the Czech Army and NATO

The LTC Magdalena Dvořáková works along similar lines to the Ambassador, however, coming from a military career she has a different perspective regarding gender and gender mainstreaming practices. She entered the Czech military 20 years ago as a conscript and had never encountered such a male-dominated environment before. While in search of female role models, she found some female snipers who had supported their male colleagues in World War II. LTC Dvořáková quickly learned how to navigate the military sphere, and now ten years later she is Secretary for the NATO Committee on Gender Perspectives, while working as the International Military Staff Gender Advisor at NATO Headquarters. In these positions she advises on how to integrate the UNSCR 1325 into NATO’s work, and more specifically the practicalities of adopting these directives and how they would impact each Allied armed force. She reiterated the need for a common understanding and commitment to the actions that need to be taken in order to better implement gender policies, and how Canada has been a consistent trend-setter for targets in this area. Through her experience at NATO, LTC Dvořáková emphasized the need for systematic enhancement of all aspects concerning women, peace and security. These initiatives are not just about inclusion or military operations; but rather, all facets relating to UNSCR 1325 need to be addressed in a systematic way, in order to change the mindset of the military as a male and masculine sphere. She stated how the military should reflect the society that they represent, and this means to inclusively represent the needs of women as well.

Academic Research on Gender in Army

The Researcher Míla O’Sullivan provided an academic view on these issues. She reemphasized the importance of an academic perspective and feminist critique of NATO, which has been only emerging in recent years. She referred to the women involved in the genesis of UNSCR 1325 who, however, did not envision the resolution to be about increasing the number of women in the army, and hence perceived NATO’s engagement with 1325 as a disappointment. In contributing to this discussion, Míla O’Sullivan discussed the gap between practice and scholarship, as a result of the lacking feminist debate on NATO and the fact that little feminist scholarship reaches the policy. She summarized the findings of the so far modest feminist literature on NATO and UNSCR 1325 and her own research concluding that despite all the institutional achievements, NATO is using gender perspective as an instrument to achieve operational effectiveness, disconnecting it from women’s rights and gender equality which can be problematic.

After these opening statements, the floor was opened for questions from the audience. These questions related to the perception of feminist scholars, how men respond to female leadership on a daily basis, whether there are systematic ways of implementing a gender perspective into new member states, and if there are instances where women need to be treated differently in the military sphere. With these questions in mind, LTC Dvořáková emphasized the importance of the pillars of UNSCR 1325: prevention, participation and protection as a means to support women as representatives of society, whether that be on the ground in a conflict or in the NATO offices in leadership positions. That being said, NATO’s security engagement in Afghanistan has contributed to great strides in terms of increased children’s education, and overall NATO has been successful in increasing the number of girls in school around the world. Additionally, the Ambassador reinforced that she believes there is a healthy feminist approach throughout NATO, but to be wary of focusing too much upon language. She emphasized that for example, military planners may understand a concept differently so they will use different words than an expert in gender relations, but that should be accepted just the same. LTC Dvořáková noted that she likes the clean definitions of the military, but with regards to gender, different nations have different understandings, so the language needs to be clear enough to cross communication lines.

Each of the speakers discussed their personal experiences, and the constantly evolving sphere of international security issues. They spoke of colleagues who caused them trouble and referred to their past MeToo moments, but each of these women represents someone who dealt with their complaints and had a support system that helped them to move forward from each incident. Nevertheless, LTC Dvořáková spoke about the annual reports the member nations must complete through the NATO Committee on Gender Perspectives, which has a section on sexual harassment and abuse. She stated that more than half of the member nations report that they do not have any cases relating to these issues; she refuted this idea entirely. The blatant lack of reporting reflects the need to revise the mechanisms in place, in order to be able to more accurately address the topic. For example, the Czech Republic is one of the nations which reports that they don’t have any cases of harassment or assault, which based on her personal experience as a member of the forces LTC Dvořáková knows to be untrue. The overall message about harassment and abuse is lacking, and this is part of the revision process that is needed for these mechanisms.

For the most part these women cited excellent leadership, which helped them to push their careers forward to where they are today. It was inspiring to listen to these women talk about their experiences in NATO, military operations and academia, all the while maintaining a gender perspective. As for NATO in particular, H.E. Kerry Buck expressed her hope for the future, and more immediately to have progress on gender in the NATO summit in July.

The article is based on the panel discussion Gender and NATO: From Military Operations to Defense in the Baltics hosted by the Embassy of Canada to Czech Republic and the Institute of International Relations Prague on June 25, 2018.

About the author: Juliana Crema is currently an intern with the Institute of International Relations. She completed her undergraduate degree at the University of Ottawa in Political Science, and is working on a Joint Master’s Degree in European Politics and Society. Her areas of interest include political economy, critical theories, and gender studies.